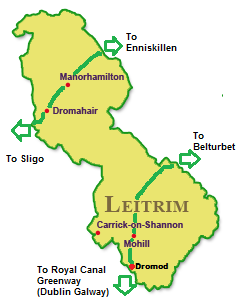 According to reports from the Shannonside newsroom, Leitrim county council is seeking funds to develop two new greenway routes that could link with the Dublin Galway Greenway.

CEO of Leitrim County Council Frank Curran says the council will apply for seven million euro to construct a cycling track between Manorhamilton to Enniskillen in County Fermanagh along the disused railway track. The council will also look to progress a greenway between Dromod in South Leitrim that will connect to Belturbet in County Cavan.

These ambitious projects will help build Leitrim's growing reputation as a outdoor activity destination and fits alongside projects such as the successful Shannon Blueway canoe and walking trails. The success of the Mayo greenway has encouraged more councils to look to build greenways in their own county and when joined together and promoted internationally could attract millions of tourists to parts of Ireland that have traditional been bypassed by tourists.

Plans by Longford county council to develop the Royal Canal greenway as far as Clondra could prove to be a very wise move as it could provide a connection between the Dublin Galway greenway to this network and provide a gateway to north west greenways in Leitrim, Sligo and Mayo.