Showing posts from July, 2015
Show all

July 27, 2015
The latest farmer position on the Greenway through Galway and Roscommon is that the will militantly oppose the Dublin Galway greenway through East Galway. http://galwaybayfm.ie/farmers- petition-galway-dublin- greenway/ Senator Healy Eames is one of the vocal policition on the farmers position and recommends using the N6 for the greenway. http://fidelmahealyeames.ie/ 2015/07/01/healy-eames-asks- minister-to-use-old-n6-as-the- only-apparent-way-to-save- greenway-for-galway/ Meanwhile, minister Donohoe is loosing patience with all the opposition on the Galway side when so many other local communities disparately want funds for greenways. He might withdraw or reallocate the funding for the Connaught leg of the greenway. http://www.shannonside.ie/ news/threat-to-funds-for- athlone-to-galway-cycleway- over-land-disputes/ And Longford council are ceasing the opportunity to get funding to connect the Royal Canal greenway to the Mayo Greenway. http://www.shannonside.ie/
Post a Comment
Read more

First look at the surface of the Mullingar to Athlone greenway 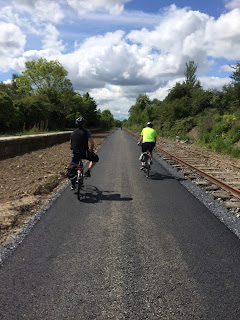 The Dublin Galway greenway blog is happy to provide some early pictures of the soon to be opened Mullingar to Athlone cycle way. The Mullingar/Athlone cycleway is part of the Dublin Galway greenway and follows the route of the disused railway between the two Westmeath towns. This picture was taken just outside Mullingar and while the greenway is not open to the public yet we were able to access the initial 2 kms of the route. We are pleasantly surprised on the high quality of the surface. The surface is equivalent to road surface and is done to an exceptionally high standard. Unfortunately the surface was only completed to Ballinalee. After that point the surface becomes compacted stone. We assume that the entire length of this cycleway will be surfaced with tarmacadam. All indications point to a mid September opening date.
Post a Comment
Read more

Will Cyclist be forced to cycle on a National Road as part of the Dublin Galway Greenway?

July 02, 2015
According to reports in the Connacht Tribune , cyclists on the planned Dublin Galway Greenway will be forced onto busy National Roads. In the article ,  Senator Fidelma Healy Eames is calling on the Minister of Transport to seriously consider routing cyclists onto a National Roads. Senator Fidelma Healy Eames says using the old N6 is the only way a greenway can be developed without having a negative impact on productive farmland. Minister Paschal Donohoe is holding meetings this week with farmers affected by the proposed route. Senator Healy Eames is calling on the minister to maximise the use of public lands and make the old N6 safe for cyclists and pedestrians. A final decision on the proposal is to be issued in September.
Post a Comment
Read more
More posts