A fundraiser organised by the Abbeyshrule Tidy Towns on Sunday 22nd November, 2015 was an ideal opportunity to celebrate the opening of the latest extension of the Royal Canal Greenway. The event was the first opportunity to appropriately baptise the route since it was fully completed into Abbeyshrule the week before. Longford County Council funded this extension and the works were carried out by Waterways Ireland.

The event was a fundraiser for the Abbeyshrule Tidy Town Group who do great work in the village and are a former National Winner and Entente Florale winner in 2012. 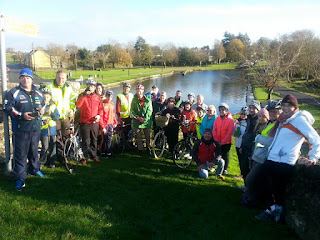 The group of about 40 cyclists met at 11 am Sunday morning and headed east to Ballincarrigy and returned. People came from Westmeath and Galway to participate. Everyone was on a high from the cycle. The cyclist finished up in the Rustic Inn, Abbeyshrule for soup and a roll. It is hoped that this will be an annual event from now on.

Donall Mac An Bheatha from Longford County Council said the event was "a beautiful morning of bright sunshine and the Canal and Bogs either side looked fantastic. It was a fantastic morning’s cycling with a few new cyclists rediscovering the joys of cycling. I told the group that next year we would be cycling to Ballymahon along the then newly completed Cycle Way (Nov. 2016)"