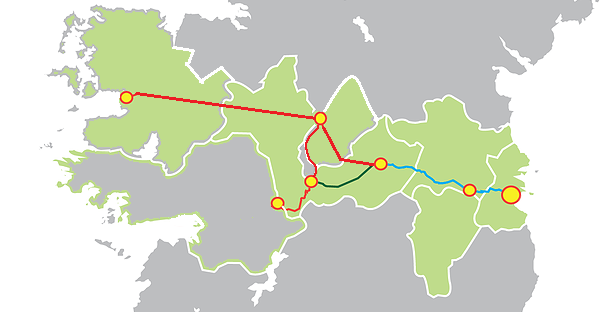 Disclaimer: This is a hypothetical article on alternatives to a coast to coast greenway that avoids Galway.

It's summer 2018 and the hugely anticipated national coast to coast greenway opened recently. The successful tourist route is already breathing life into towns and villages right across the country. Thousands of tourists are using the greenway and businesses right along the route are seeing huge ecomonic opportunities. The greenway route is not only being used by tourists, but it also being used by local people for recreation and school children for commuting to and from school. Some people living in rural communities have commented that this is the first time that they have had a safe route for walking and cycling.

In late 2015, the Dublin Galway greenway hit major opposition and the route was modified to avoid Galway altogether. At that time Galway farmers mounted an IFA backed campaign to oppose the greenway through their communities. They were angered by the manner of the consultation and they had concerns about the impact the greenway would have on the productive use of their farms. The transport and tourism minister, Pascal Donaghue, decided to pause the Galway section and focus spending on the Meath and Kildare sections of the Greenway. This decision proved a very wise one as it connected the newly opened Athlone and Mullingar greenway and the Mullingar to Longford greenway.

Following the success of the Kildare and Meath sections of the greenway, the Longford and Westmeath council agreed to create a triangular loop between the towns of Longford, Athlone and Mullingar. This circular route took in the "old rail" trail on the disused Athlone to Mullingar railway, the Royal Canal greenway from Mullingar to Longford and the picturesque Lakeside cycle along the shores of Lough Ree between Longford and Athlone.

This created a major cycling destination in the midlands for multi-day holidays and put Ireland on the international map for cycling holidays. A few months later, the greenway network was further extended to Ballinasloe using a route that was 90% in state ownership.

The last section connecting Longford to Westpost was opened by the Taoiseach and the Minister for Tourism and Transport last month. This completed the final section of the coast-to-coast greenway and connects the national greenway to the hugely successful Western greenway in Mayo. The tourism potential of this cycling product is huge. Europe cycling tourism is big business. Over 5 million Germans take a cycling holiday every year. Domestically, the German cycling tourism market has sales of more than €9 billion annually. In 2010 just over one million Dutch people went on a cycling holiday with the potential market estimated at €1.7 million

Plans are also afoot to connect the coast to coast greenway to the proposed Sligo to Athreny greenway at Charlestown, Co. Mayo in a move that will eventually bring the greenway to Galway.

PLEASE NOTE: This is a fictional article but one that the author believes could make a lot of sense. Dont book your holiday based on any information in this post.