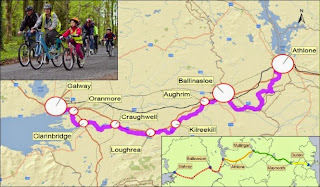 Several people have contacted us and asked if there is single source of information on the proposed Dublin Galway greenway route. The route crosses 6 county borders and will involve the cooperation of at least 8 local authorities and government bodies. So its not surprising, given the number of bodies involved, that there isn't one single place that lays out the entire route. Note that many of the proposed route is subject to planning and land holder agreements.

The RCAG Royal Canal Amenity Group has made a good start to list the sections along the Royal Canal and the following is our understanding of the proposed route. Please get in touch and help us to keep this information up to date.

Kildare: No work has commenced. Subject to Planning

Meath: No work has commenced. Subject to Planning

Longford: As part of the greenway from Dublin to Galway, a high quality walking and cycling path has been completed between Longford town and Richmond Harbour in Clondra, 16.5km. See Map

Ballinasloe to Galway. Again up for public consultation.
http://www.galway.ie/en/media/60140838_Public%20Consultation%20Rev4-KEY%20PLAN_.pdf